We've had the opportunity to get out on the road and explore Route 66 in New Mexico numerous times, both eastbound and westbound.

A popular stop on those road trips is the City of Gallup, in far western New Mexico, near Arizona.

Gallup is the largest city between Albuquerque and Flagstaff, and has a population of about 22,000 residents.

The city sits at an elevation of 6,512', and is known as the "Most Patriotic Small Town in America".

It is located about 140 miles west of Albuquerque, and 185 miles east of Flagstaff, and only 23 miles from the Arizona-New Mexico border.

The city is located in the middle of the Navajo Reservation.

The city was founded in 1881 as a railhead for the Atlantic and Pacific Railroad, and named after David Gallup, a paymaster for the railroad.

The railroad today remains an important industry in the city.

Because of the nearby rugged terrain, it was a popular location in the 1940s and 1950s for Hollywood Westerns and has hosted many well-known movie stars such as John Wayne, Katharine Hepburn, Humphrey Bogart, Ronald Reagan and Kirk Douglas.

Restaurants such as the famous El Rancho reflect the western and Indian influences on the town.

Today’s visitors can partake in a meal at the El Rancho or enjoy an overnight stay and tour the memorabilia-lined grand lobby.

Gallup has over 30 hotels and over 90 restaurants and is a popular stopover point for those traveling Historic Route 66. 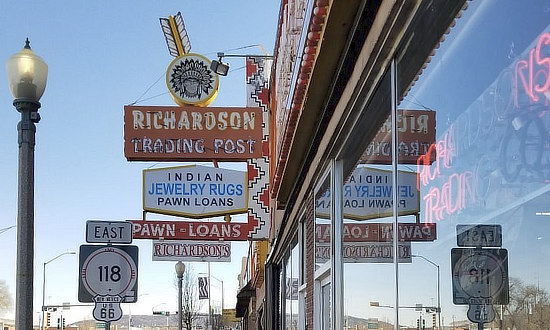 Lodging, Dining and Attractions in Gallup ... from TripAdvisor

Side Trip to Monument Valley from Gallup

For many Route 66 travelers heading westbound across Arizona, a side trip to Monument Valley is a great opportunity to see this world-class destination.

Monument Valley Navajo Tribal Park is located in extreme southeastern Utah, on the northern border of Arizona. It is operated by the Navajo Nation, not the National Park Service.

Many travelers on Historic Route 66 make a once-in-a-lifetime side trip to visit Monument Valley.

The valley is host to towering sandstone rock formations that have been sculpted over time and soar 400 to 1,000 feet above the valley floor. Combined with the surrounding mesas, buttes, and desert environment, Monument Valley is one of the natural wonders of the world.

Over the years, Monument Valley has been the locale for the filming of numerous movies starring such film legends as John Wayne. Scenes in movies such as Stagecoach, Back to the Future Part III, Easy Rider 2001: A Space Odyssey and Forrest Gump have been been filmed in the valley.

Visitors may explore the 17-mile scenic drive through the park in private vehicles or book a half-day or full-day jeep tour to explore the area's backroads and sacred lands with the help of a local guide.

The road passes many notable features, including the Mitten Buttes, Three Sisters, Yei-bi-chai, North Window, and the famous Totem Pole. Passenger cars can drive the road, although care must be taken in loose sand and rocky areas. No hiking or driving off the posted track is allowed.

If you have visited Holbrook and Winslow before, one scenario is to divert off Route 66 in Gallup. Head north on U.S. Highway 491 to Shiprock, then west on U.S. 64 and and U.S. 160 to Kayenta. From there turn north on U.S. 163 to Monument Valley.

After your visit, travel to Tuba City and Flagstaff to rejoin Route 66.

A option for the return to Flagstaff is to divert westward to the Page, Arizona area. Here visitors can explore Antelope Canyon, Horseshoe Bend which is a horseshoe-shaped incised meander of the Colorado River, Glen Canyon Dam and Lake Powell. After your stay in the Page area, drive south on U.S. 89 to Flagstaff.