We have traveled Historic Route 66 across Arizona multiple times over the years, both eastbound and westbound.

Some of the journey is on I-40, which parallels the old Route 66 in many places. We always drive the segments of the Mother Road where it still remains. Exits to Route 66 are marked in many locales.

One of our favorite places and scenes along the Mother Road is Williams, Arizona, west of Flagstaff.

Founded in 1882, Williams was named for Bill Williams Mountain, the volcanic peak that rises above it. The mountain has long been important to native peoples of the region including the Havasupai, Hualapai, Yavapai and Hopi.

Williams is located just an hour south of the Grand Canyon and is known as the “Gateway to the Grand Canyon” because of the variety of lodging choices, activities for the whole family, its connection with Historic Route 66, and plenty of outdoor recreation to enjoy.

The historic Grand Canyon Railway ferries hundreds of thousands of tourists every year from Williams to and from the Canyon. The Kaibab National Forest and the Bill Williams Mountain area provide ample opportunities for camping, hiking and outdoor adventures.

A Route 66 Stopover in Williams, Arizona and the Grand Canyon

From Flagstaff Historic Route 66 passed through Williams, the jumping off point to the Grand Canyon, followed by Ash Fork, and then into Seligman. The last section of Route 66 nationally was decommissioned through Williams in 1984, replaced by I-40.

Side Trip from Route 66 to Grand Canyon National Park

Grand Canyon National Park is located in Arizona near Flagstaff and Williams, and is centered on a Colorado River canyon that is 277 river miles long, up to 18 miles wide, and a mile deep. The Park is one of the world's most popular natural attractions, with attendance exceeding 6 million visitors a year.

Many travelers on Historic Route 66 make a side-trip to visit the Grand Canyon as the park lies only 54 miles north of Route 66 from Williams. The park is also located about 75 miles northwest of Flagstaff.

There are two access routes to the Grand Canyon, the most popular one being Highway 64 north from Williams, located on Interstate 40 and Route 66.

Another mode of transportation into the park is via the Grand Canyon Railway, which runs from Williams directly into the park. The railroad has operated since 1901.

The South Rim of the canyon, with an elevation of about 7,000 feet, is open year-round, while the North Rim is open only part of the year, during the warmer months. Route 66 travelers typically visit only the South Rim. 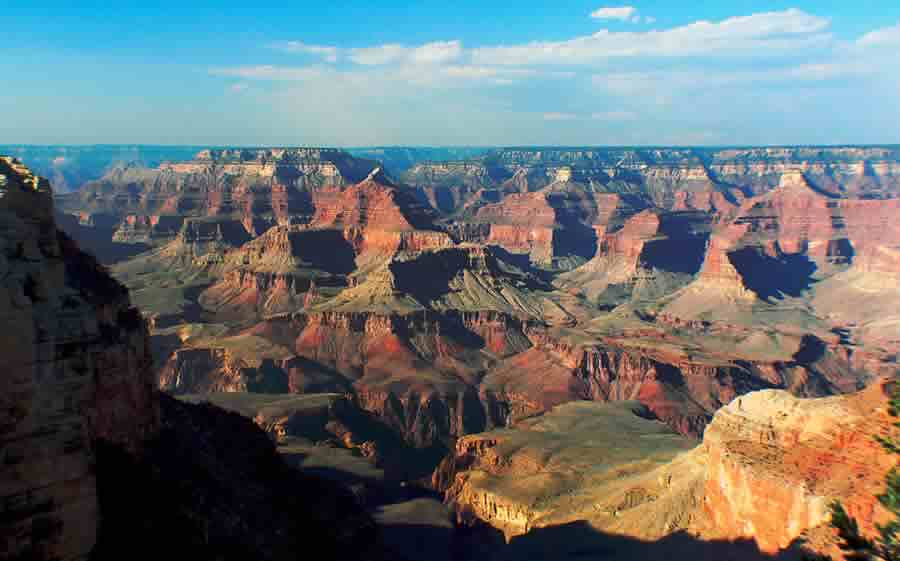 Lodging and Dining Options in Williams